Chapter 9 – Getting to Roncesvalles (Day 1 of Camino)

Early morning we could see the early morning mist blanketed over the Pyrenees like it was waiting for the sunlight to unveil it.

I set my temp Basel to -50% (reduced the Basel insulin (slow acting insulin) to a temporary setting to -50% for a set time in my insulin pump) since the whole day will be “one long physical activity”. I set it for 12 hours as we heard it would take minimum 8 hours to reach Roncesvalles from the tourist office. I estimated from speaking to many people and Camino Forum it that would be minimum 10 hours – I just wanted the extra two hours for meal and blood sugar testing breaks. The full dosage of Basel insulin per hour would result in many low sugars and it could get dangerous to walk the mountain with the strenuous activity of climbing without proper training, snacks etc. This is what my whole training in Toronto was all about and this Basel setting has helped me knowing “my numbers” as Sebastien Sasseville talked about. 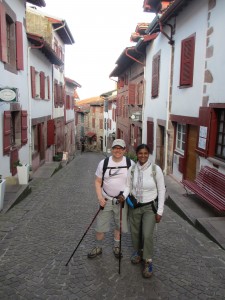 We stepped out of the hotel like warriors armed with our packs and walking poles like we were ready to tackle the mountain – totally exciting feeling. As we walked out of SJPP we could hear the church bell ringing 8 times as it was waving goodbye to us. We walked through the medieval “Gate of Spain” towards our “Route de Napoleon” and it really helped that we had walked few hundred meters yesterday so we were familiar with our path. Right away we could tell that it wasn’t going to be easy, within 400 meters out of town we climbed a steep hill that was so vertical it took us by surprise and we were out of breath. We found ourselves quickly out of town and walking by many farms. Our focus was to get to Orisson 11 km and if we could get there in 3 hours (giving us 3 hrs per km) as the climb was quite steep and hard.  We passed many pilgrims along the way and met a whole group of Canadians and many students from Europe all with big backpacks as we sported our small day packs. 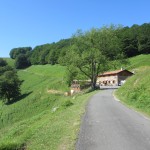 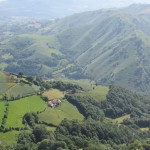 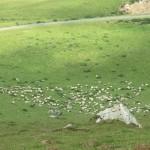 If the Pyrenees could talk …

The climb was hard and invigorating in many ways; we stopped frequently to take a sip of water and Gatorade (to replace salt, carb and electrolytes) and snacked on fig-newtons (prescribed by many athletes as a snack of choice).  As we climbed the scenery kept getting grander and beautiful, we couldn’t believe our eyes. The only down side was that we had to keep climbing but we took few moments to enjoy the breathtaking view of the mountains and cows roaming the field as we could see SJPP disappear.  We met so many travelers at the water fountain after the village of Hunto as we all exchanged stories and wished Buen Camino to each other and climbed the mountain.  We anticipated how Orisson would look like? To our surprise Orisson snuck into us quite as a mouse, two buildings on the middle of the mountain road, that’s it – wow! We made it less than 3 hours to Orisson and we shouted in joy as we knew we were going to conquer the Pyrenees by end of the evening, no problem.

The real voyage of discovery consists not in seeking new landscapes, but in having new eyes ― Marcel Proust

Like seasoned traveler we unloaded our pack on the eating area and filled our water bottles, made more Gatorade (we took Gatorade crystals) and packed on Bocadillo Chorizo (Spanish sausage sandwich) and said hello to few pilgrims and high tailed to the mountain as we knew we had a hard day head of us as we were only finished 1/3 of the climb. 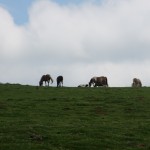 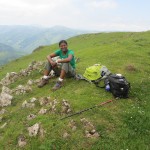 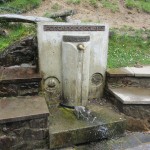 Anyone reading this blog and wants to do the Camino there is no question, you must try the Route de Napoleon – the mountain and the view is incredible. Flocks of Griffon Vultures, Hawks and Falcons soared over hot air pockets looking for easy preys along the mountains as it was midday. You could see flocks of black faced sheep roaming the high pasture as they are called Manech for their exquisite milk producing Ossau Iraty cheese in Navarre. Many kinds of flora along the way – too many to mention and took pictures as we could as they blanketed the mountains. As we were in higher elevation about 1200m (about 15 km) we decided to take a lunch break in one of the prettiest spot along the road. We passed many pilgrims but none were close to each other as we were only one at this area and it was our castle for the time being. We sat on the rock and watched the sheep calling each other from one mountain to the other as they were singing. We could see at a distance Pyreneean chamois (wild horse) grazing the mountain pasture. I gave 50% bolus insulin for my lunch since the sandwich was so heavy in carb (so much bread). 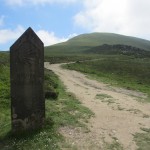 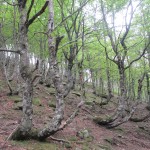 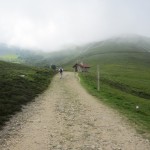 We could totally see us coming back to this climb once more in our life time as the serenity, the magic, the beauty in this mountain that I’ve never seen anywhere before. We packed up and walked toward to the summit as we still had another 5km to climb. The climb was harder than we thought as it became rocky with big boulders and you had to watch every step forward. Closer to 3pm still no sight of the summit as we didn’t see anyone for quite some time except at the distance the young Korean woman that we had met earlier who was walking slow and steady.

We got to the fountain of Roland and ran into a German traveler where he had been walking since April from Frankfurt by foot. It was quite inspiring to hear his story. After 2km we could reach the summit where there were many pilgrims resting and enjoying a snack. We fell to the ground in joy. We asked ourselves, where did all these pilgrims come from as most didn’t pass us? This was my first successful mountain climb to the summit the feeling was indescribable.  We met other travelers and exchanged stories as the German traveler said in all his journey climbing the Pyrenees was the longest and toughest. His comment somehow made us feel good as we thought it was only us who thought it was a tough climb taking 8 hrs to climb it. 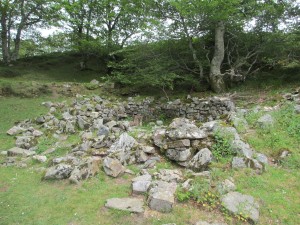 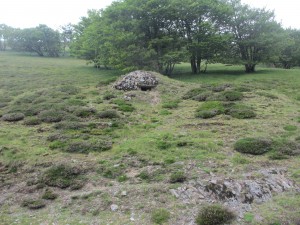 There was a choice in descend paths as well as we were advised to take the steep 5 km path down to Roncesvalles rather than through a thistle path which was dangerous.  I am not sure which was dangerous but our path was straight down with large boulders and stones and every step had to be cautious, one false move could result in injury or falling forward.  The descend down was arduous and steep as well as we were going through thick forest and not knowing how far we had come down. Finally we could hear people, church bells not far away, as usual Roncesvalles at 950m snuck into us so quickly it was anticlimactic. It took us in total 10 hours from beginning to end including our breaks, not bad I thought, it was the longest day in our week journey. 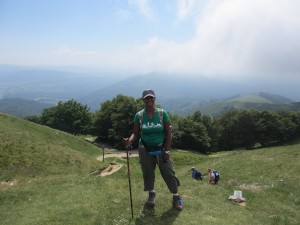 Our hotel was right on the path of the Camino and our suitcases were waiting. We got our second stamp and unloaded our packs as we were very curious to the famous church in town before it closed at 8pm.

Roncesvalles is a small town filled with a Romanesque church, a monetary and couple of albergues and a hotel, nothing more, not even a grocery shop or shop of any kind. So bring extra supplies until you hit the next town. We were happy to meet other travelers at the bar of our hotel which was quite famous (the only one) and exchanged stories while having a beer. 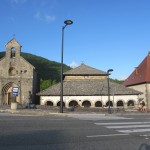 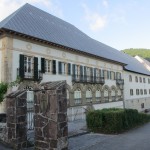 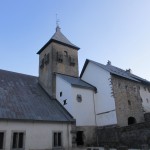 It felt like everyone knew each other. We were introduced to other Canadians who walked that day as people got the wind that we were from Canada and that we might know each other. It’s quite funny actually but it was nice to connect and hear everyone’s stories. 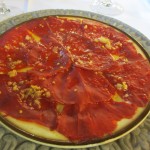 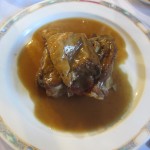 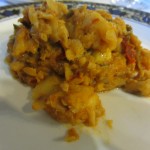 For dinner we had the regional food from Navarra which was exquisite and had the same wine Irouleguy that we had in SJPP. If you are in Navarra you must try the cordero al chilindron (Lamb stew), its outstanding made with local wine. After dinner we passed out in bliss contemplating how our next day’s long trek to Zubri was going to go.

Thought of the day: I can really do this!